This easy Cinnamon Roll Mug Cake has ZERO grams of added sugar and yet it tastes just as good as Cinnabon! It’s so easy to make, you can create this classic treat in just two minutes!

If I asked you to guess my #1 favorite mall food court food could you guess it?

Yes, I know I am a dietitian, but even I can’t resist those ooey-gooey Cinnabon Cinnamon rolls. Growing up, I would take any excuse to run to the mall so I could grab a cinnamon roll at the food court.  And then I learned how to read food labels…

Once I realized just how much added sugar in one Cinnabon, they have never tasted quite the same. Now don’t get me wrong, there’s always room to treat yourself! But I found a way to indulge in my Cinnabon craving with this easy sugar free Cinnamon Roll Mug Cake!

A mug cake is the fastest way to a warm sweet treat! With just a handful of ingredients and your favorite coffee mug, you microwave this cake so that it’s ready in no time. It’s fluffy and slightly gooey in the center, making it the perfect single-serve dessert to cure any craving.

I wanted to develop this Sugar-Free Cinnamon Roll Mug Cake for people that need to monitor their carb and sugar intake. As a dietitian and diabetes educator, I love surprising people will easy swaps that allow them to enjoy the sweet things in life without spiking their sugar levels.

What other flours can I use as a substitute?

You can also swap out refined flours with whole wheat flour, but I recommend using whole wheat pastry flour if you go this route since it is a softer, more delicate flour versus traditional whole wheat flour which can make your cinnamon roll feel and taste a bit heavy.

In addition, lower carb flours like coconut flour and almond flour can be used when making sugar-free cinnamon rolls, but there are not equal swaps. These two flours absorb more liquid than oat and wheat flours, so a lot of adjusting is required to get it right. This recipe has not been tested with alternative flours, but if you have some success with experimenting, please let me know!

I’ve never used dates in cooking before, what else should I know?

I guarantee you will be hooked on using them once you try them! Medjool dates are larger and have more of a caramel-like taste than other dates, making them perfect for adding sweet flavor with no added sugar to baked goods.

In this sugar-free cinnamon roll recipe, the Medjool dates are pureed and mixed with cinnamon as a replacement for brown sugar to create a sweet and delicious filling for the cinnamon rolls with no added sugar.

How can I double this recipe?

This recipe is specifically creating for a dessert for one. However, you can split the existing recipe into two small mugs when cooking. You could also double the recipe to make two large cinnamon roll mug cakes but adjust the time on the microwave accordingly and check to make sure they are cooked through.

I have extra cream cheese leftover.

This recipe does make extra cream cheese. You can store it in an airtight container for up to 7 days. Use it to make more mug cakes or even spread it on some whole wheat toast for a quick breakfast or sweet treat.

Looking for more delicious, low sugar desserts? Try a few of my favorites: 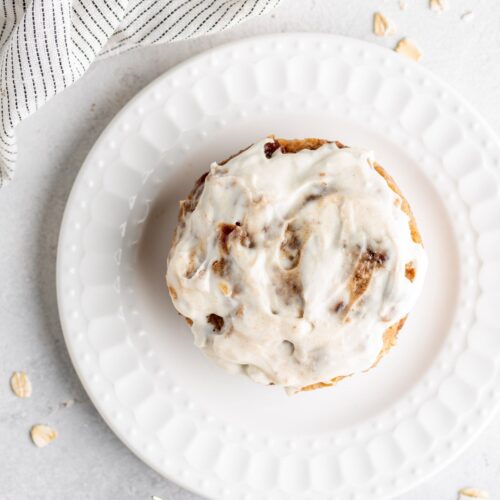 This Sugar-Free Cinnamon Roll Mug Cake contains no added sugar and is a source of fiber.

This Cinnamon Roll Mug Cake is magic in a cup! This gooey, delicious cinnamon roll with no added sugar is ready to eat in 90 seconds. What could be better?! 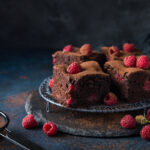 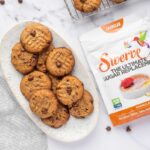 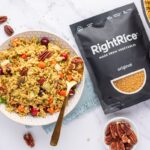 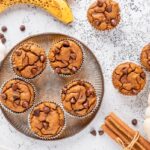 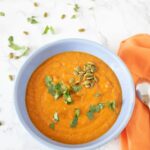