I’m not naming names, but there is a certain 4 year old in my house who has been refusing to eat his vegetables lately ???????? I try to avoid food battles since they only tend to amplify picky eating patterns, so I am trying a new strategy instead. I am focusing on exposing him to more vegetables in a stress-free way by making them ‘art’ instead of ‘food.’

I give him vegetables cut into shapes and allow him to design whatever ‘art project’ he’d like on a plate. Today’s creation —> a cucumber & carrot snack that is almost too cute to eat ????  He may or may not snack on a few of the art ‘pieces’ while he plays, but touching the vegetables and recognizing their shape, texture, and smell all increases his exposure. Did you know it can take as many as 20 exposures before a child will accept a new food?! ????And by accept, he may just lick the food or touch it to his lips ???? ????‍♀️That may not be the acceptance I am hoping for, but it’s a step in the right direction at least ???? So if playing with his food = exposure which = acceptance of vegetables, this momma’s gonna do what she’s gotta do to get over this vegetable strike ???? 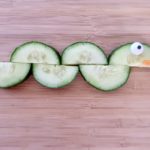